Rhythm and Reaction: The Age of Jazz in Britain, Two Temple Place

11 members of the Group appreciated both the exuberant décor of the building and the cheerfully contrasting style of the exhibition on between-the-wars Jazz, and afterwards adjourned to a café to discuss these and many other matters.

Drawn in Colour: Degas from the Burrell Collection

Five intrepid souls evaded illness, slippery pavements, heating problems and everything else that the vicious late winter could throw at us, and were greatly cheered by the colourful Degas works on loan from the Burrell collection in Glasgow.

Gursky at the Hayward Gallery

Andreas Gursky has devoted his life to developing photographic techniques and the effects he achieves are extraordinary. 12 members of the Galleries group visited the exhibition on Friday 13th April at the Hayward Gallery. One of them stopped in front of the first photograph and exclaimed “Well! My gob is smacked already! “, which just about summed up the experience of us all.

Some members of the group visited the Sir John Ritblat gallery in the British Library. We could only do justice to a small selection of its many treasures, from Magna Carta, through ancient and beautifully illustrated texts of a number of religions, jottings of famous writers, Shakespeare’s first folio and early methods of notating music on paper, to Karl Marx and, unexpectedly to some of us, the Beatles. The morning was rounded off with coffee and chat outside in the sunshine.

Apsley House offered so much of interest that it was hard to take it all in. The collection ranges from gifts of silver and porcelain to an astonishing range of Dutch, Spanish and Italian works by major artists. The cafe next door provided not only coffee and a chance to chat, but also an excellent close up view of the Household Cavalry in all their splendour

Aftermath : Art in the Wake of World War I

A sizeable group visited Aftermath : Art in the Wake of World War I at Tate Britain, followed by lively discussion in the Tate cafe. It was agreed, among other things, that however much we had thought we knew about the First World War period, we had all learned something new; that some of the post war art on show was very good indeed; and that facial expressions in the later paintings were still sad and strained. We were also very impressed by prints by Kathe Kollwitz and others.

Our biggest ever group visited the Exhibition of between-the-wars Italian paintings on Friday and greatly enjoyed Luke Alder’s talk on these works as well as on selected works from the Permanent Collection, all followed by coffee and conversation in the Gallery’s cafe.

“As a female student at the radical Bauhaus art school, Albers was discouraged from taking up certain classes. She enrolled in the weaving workshop and made textiles her key form of expression. She inspired and was inspired by her artist contemporaries, among them her teacher, Paul Klee, and her husband, Josef Albers. This … exhibition illuminates the artist’s creative process and her engagement with art, architecture and design. You can discover why Albers has been a profound influence on artists around the world via more than 350 objects from exquisite small-scale ‘pictorial weavings’ to large wall-hangings and the textiles she designed for mass production, as well as her later prints and drawings.” – Quoted from Tate Modern website. 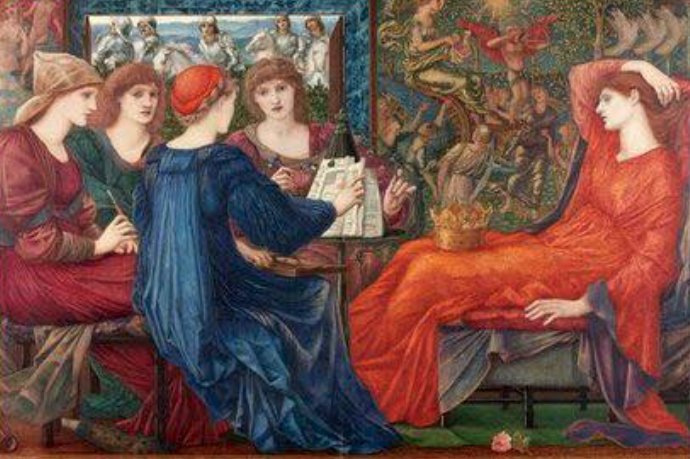 We visited the Serpentine and Serpentine Sackler Galleries on a glorious crisp January morning to see Uumwelt, a collaboration between French artist, Pierre Huyghe, and neuroscientists In Japan to give visual form to brain activity using MRI scans.

At Serpentine Sackler, there was another collaboration, this time between designer Beca Lipscombe and artist Lucy McKenzie of Atelier E.B. Passer-by incorporated Fashion photography and magazines, mannequins, therapeutic dolls, traditional costumes, tapestry and “vitrines” as well as some contemporary designs.

Our visit concluded in the spectacular Zaha Hadid Cafe in brilliant January sunshine.

Mantegna/Bellini at the National Gallery

A sizeable group of us visited the Ruskin exhibition at Two Temple Place this morning. Much of Ruskin’s own art was on show, particularly some detailed architectural drawings and delicately accurate nature sketches. We were amused by his various dislikes, which ranged from Wagner through railway stations to bicycles, and wondered how it had come about that such an eccentric person had wielded such a strong influence upon artistic taste. Also included in the exhibition were paintings and objects that Ruskin admired and collected, including several paintings by Turner and others, and numerous miscellaneous found objects. After visiting the exhibition many of us adjourned to the courtyard tables of a Somerset House café, where we baked, coats off, in unseasonable sunshine.

Despite an unprecedented number of last minute withdrawals, a sizeable group of members visited Tate Britain for the Don McCullin photography exhibition. It was not an experience to be taken lightly: horror at the devastation and suffering depicted mingled with amazement at McCullin’s courage in going again and again to witness such devastating scenes, and with sheer admiration of his skill. We reassembled, shaken, exhausted but in a strange way inspired, to bring each other down to earth over tea or coffee, cakes and chat in the Tate café.

On Friday 29 March a group of eight members of the Exhibitions and Galleries group thoroughly enjoyed the Bill Viola/Michelangelo Life Death Rebirth exhibition at the Royal Academy. The exhibition was breathtaking at times. Both artists engage in different ways with the passion and drama of life and death. We thought thematic affinities were demonstrated and that the contact enhanced rather than diminished. The overall juxtaposition of the Renaissance master’s 15 exquisite small drawings and one beautiful sculpture with Viola’s spectacular high tech video installations was a rich experience. It certainly provoked much discussion afterwards.

Sixteen members of the Group visited the Pierre Bonnard exhibition at Tate Modern, glorying in his use of colour and sympathising with his efforts to remain “the painter of happiness” even when his life was going less well. After a refreshing coffee break, an intrepid few also attended the adjacent Dorothea Tanning show, with its surrealism melding into colour extravaganza, its innovative soft sculpture and its demonstration of how to live an active old age.

Sorolla : Spanish Master of Light at the National Gallery

A dozen or so members plunged into the unknown on Friday to encounter the works of Joaquín Sorolla (1863-1923), the post impressionist Spanish painter, unjustly ignored, we decided, in this country. Post-impressionism is but one aspect of this talented artist; there are homages to Velázquez and Goya, whose works Sorolla studied during his training; some excellent portraits, both formal and informal; pictures of landscapes and gardens; evidence of a social conscience;and above all a unequalled skill at conveying both sunlight and movement. Most of the group had never heard of Sorolla before the visit and were favourably surprised at what they encountered.

Van Gogh and the UK at Tate Britain

A sizeable group visited Tate Britain to discover the links between Van Gogh and the UK, beginning with his admiration for British artists and authors and his love of London. A number of his prints and paintings then demonstrated the development of his style towards his later, unmistakable hallmark, and the third part of the exhibition included a number of British paintings imitating, with greater or lesser success, Van Gogh’s own, some might say inimitable, style. There was much discussion over coffee in the Tate Café afterwards, some but by no means all of it on the subject of artistic influences!

Münch at the British Museum

To the Münch exhibition at the British Museum. This mostly concentrated on the artist’s prints rather than his paintings, and gave interesting insights into how they were made, and the way he re-used them over the years to express different moods – or perhaps different shades of melancholy? His portraits of Ibsen, Strindberg and others were particularly impressive, and contrasted with the less sharply characterised personages in his other works.

Our first visit as a group to the Barbican Centre. We were impressed by the work of Lee Krasner, wife of Jackson Pollock, which ranged from awe inspiring huge paintings to detailed small ones; were amused by her use of torn up pieces of earlier work to make collages; and coveted the glorious mosaic coffee table made from an old waggon wheel. We were impressed also by Lee Krasner’s courage and perseverance in becoming and remaining an artist in a world unready to accept women in that role – epitomised by the comment on her work of a (need I say male?) teacher – “It’s so good that you wouldn’t know it was painted by a woman.” The visit culminated in the usual chat, not all about art, in one of the Barbican’s several cafés.

A large group enjoyed the Natalia Goncharova exhibition at Tate Modern. We were amazed at the versatility of her talent, her work ranging from youthful studies of Russian peasants, through Cubism, religious icons, Rayism – the relationship between humans and machines – to haute couture and theatrical sets and costumes. The label of “everythingism” bestowed by her contemporaries was indeed appropriate, and her use of colour was glorious. Discussion over coffee was animated and included the observation that few of us had ever previously heard Goncharova’s name whereas many of her male colleagues in her various fields of activity remain household names.

Olafur Eliasson exhibition in the Blavatnik section of Tate Modern

A large group visited the Olafur Eliasson exhibition in the Blavatnik section of Tate Modern, where Noeleen gave us an insightful introduction to this important and exciting Danish/Icelandic artist. Eliasson is currently based in Berlin, where he works with collaborators on projects which cross many artistic lines, often focusing on environmental concerns and exploring space, natural phenomena, light and community in a dramatic demonstration of the fluid boundaries between art and nature, as well as the impact we have on our environment. The final section of the exhibition shows on a large wall the multiple researchers and crafts people currently working on projects inspired by Eliasson, including his renewable energy Little Sun project supplying lights to communities where people depend on hazardous materials such as kerosene for light and other energy needs.

Members of the Group that visited the William Blake exhibition on Tate Britain were full of admiration for his minutely detailed drawings, paintings and etchings and his beautiful tiny calligraphy, if somewhat mystified by some of his more imaginative symbolism.

A large group visited the Pre-Raphaelite Sisters exhibition at the National Portrait Gallery. We were somewhat overwhelmed by the sheer number of these remarkable women, but delighted to discover that a sizeable number of them had, with the encouragement of their husbands and male colleagues, been painters and artists in their own right, in addition to their better known role as wives, models and muses. Having migrated to the National Gallery café to secure a table that accommodated us all, we discussed, among other things. how history has a way of forgetting women’s art which was highly respected in their own lifetime.

A large group visited the Dora Maar exhibition at Tate Modern. It was generally agreed that, while not quite soaring to the heights of her lover Picasso, whose portrait of her Weeping Woman was included in the exhibition, Dora Maar’s own talent, particularly for photography, richly deserved this opportunity to emerge. The rediscovery of forgotten wives, lovers and models has been a major theme of our 2019 programme.

The visit concluded in the Turbine Hall with American artist Kara Walker’s stunning and subversive installations. At first glance, the enormous fountain looks like a Victorian monument, but on closer inspection it is a disturbing account of the cruelty of the slave trade and the dreadful fate that awaited African captives. The second piece is an oyster shell concealing a child’s tear-stained face. Both works are replete with allusions, artistic and political.